Today, I am highlighting the joints I released in 2010. First off is the collaborated mixtape with Greenville, NC H2OKZ (Pronounced Hooks). 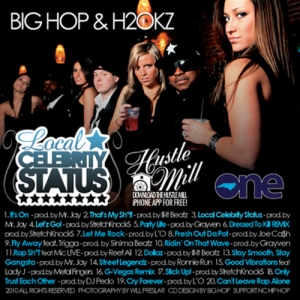 April was a big month for me in 2010. I released 2 mixtapes and did a string of shows to promote the releases. LCS was a fun mixtape to put together with such favorites like, “It’s On,” “That’s My Sh*t,” “LCS,” “Party Life,” & more. The theme of the project was having fun and doing what you love. Guest appearances from Trigga, Mic L!VE, and Lady J. Production from StretchKnockS, Carolina Beats, L’O, Ill-It Beatz and more. Download this joint for FREE here…

This entry was posted on December 29, 2010 by bighop. It was filed under Free Download, Graphic Design, Mixtape and was tagged with Big Hop, H2OKZ, Hooks, Local Celebrity Status.