The homie Trick is back with this month’s book review. This time he looked at Lox & D-Block member, Styles P’s first foray into literature with his book, Invincible. Many of us know the Ghost as being an incredible song writer, but incase you were wondering about his literary chops, check out what Trick had to say about his debut…

When Hop told me I was going to be reviewing the book that Styles P had written, I think my response was something like “What the fuck could Styles possibly have to say that he needed to write a whole book to get it out?”  I mean, don’t get me wrong, the Ghost has always been one of my favorite rappers, but even though his lyrics might go a little deeper than the average gangsta rap, he’s not somebody I would have seen as the author type.  But Styles came correct with his debut novel Invincible.

As you’d probably expect, the story revolves around guns, money and murder.  Jake, the main character, wakes up from a coma after being beaten close to death in jail, and wages a one man war against the powerful but mysterious crew that tried to take him out.  Honestly, I had this book for like a month before reading it – I envisioned it being a literary version of the “State Property” movies – an unoriginal plot with a lot of holes, not put together all that well, and only mildly entertaining.  But Invincible has a main character you can’t help but pull for, the story is told well and moves along quickly (not a lot of time wasted with details), and most of it is believable enough to keep you interested.  The writing isn’t perfect – the writing style varies from over correct (lots of “you are” and “I am” in dialogue when it’s hard to see the characters not saying “you’re” or “I’m”) to using incorrect verb tense during the narrative; some of the plot twists are a little over the top; some of the characters could use a little more developing – but all in all it’s better than I expected.  More “Paid in Full” than “State Property.”  It won’t win any literary awards or go down as a classic piece of fiction, but Ii Styles writes another one, I’ll read it. 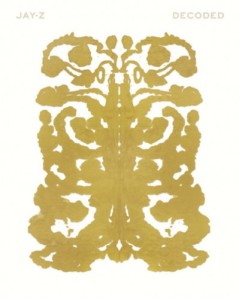 So, if you are familiar with me, then you probably know my homie, Trick Trick. Noooo, not Detroit’s Trick Trick, but DC/Bad Newz’ Trick Trick. Like many, he didn’t ask for that nickname, but as of right now, he is pretty much stuck with it. Hahaha. Anyways, Trick is a major hip hop fan, and a big reader,  & since there has been an influx of Hip Hop inspired books dropping, it just made sense to include him in the excitement of blogging. Here is his first assignment, Decoded by Jay-Z. It’s a book about the intricacies of Hova’s lyrics and insight into what inspired them, etc. Check out what Trick thought about it…

I’m a big Hova fan.  Big as in I think the man might be the best to ever pick up a mic fan.  When I heard he had a book coming out, I was cautiously optimistic; always interested in what Jay’s doing, but I’ve always been a fan of celebrities sticking with what got them there and not venturing outside of the box I know them in, it’s too easy to get exposed outside.  In Decoded, Shawn Carter doesn’t stray far enough from what he’s always been about, though, to worry about that.

If you’re a fan and have listened to his music, not just nodded your head to the beat but actually followed his lyrics, there’s not a whole lot of new insight you’ll get from reading Decoded.  More detail, confirmation of events alluded to, but for the most part the book is, as the inside front cover says, a “collection of lyrics and their meaning” That’s not to say that there aren’t any new stories told – background into the history of the making of Roc-a-fella, and his mentality during the conversion from life as a hustler to life as an entertainer are pretty cool, as are the stories of Jay with Jaz (the beef with whom he never mentions despite Jaz making repeat appearances throughout the book), B.I.G.,  and other artists.

The layout and design of the book are pretty dope, as is the format – a few pages of background, point of view, philosophy on whatever issue – and then the lyrics to a few songs, with footnotes to explain or expand on certain lines.  The footnotes are interesting, but not as illuminating (especially for a member of the Illuminati (just kidding (maybe))) as they probably could be and not always satisfying. The choice to clarify the meaning of some slang terms but not others seems pretty random, some of the notes are obvious/unnecessary, and some come off as just self-serving.

All in all, Shawn Carter the author pulls it off pretty well.  He acknowledges the history of rap and is consistently gracious when mentioning other rappers, and is determined (sometimes annoyingly so, but that’s just me) to make the reader understand that rap should be considered legitimate poetry.  He solidifies his image of being logical, witty, and conscious, even if he’s far from a “conscious rapper.”  Decoded is an interesting read.  If you’re a fan, of course you’ll like it, it’s Jay.  If you’re not a fan, it probably won’t convert you because again, it’s Jay.  But if you have no opinion one way or the other, hopefully you will at least come away with a respect for who the man is and what he does.

Official Score: 4 out of 5 notepads

Make sure you check back the beginning of every month from here on out, as Trick hits you with commentary on new hip hop literature. Next month is a review on Styles P’s first go around as an author, with his new book, Invincible…