Poe Mack – Back At It (Music Video)

Shouts to the homie Poe, Van Gundy & Kris with Oktobervision for putting together this dope video. “Back At It” appears on Move Mountains, Poe’s critically acclaimed mixtape that was presented by kevinnottingham.com. So if you do’t have that, make sure you download it. Until then, check out the new video, leave a comment, spread the word, ENJOY….

I am Performing Tonight in Roanoke VA…

Tonight is shaping up to be a crazy night. Besides such VA/NC artists, Poe Mack, Bo Jankans, Lazurus, and more, you have Rapper Big Pooh of the legendary, Little Brother, that will be rocking the stage. You can’t put a value on the motivation that LB has provided any true school fan, especially artists from NC. At Awful Arthur’s this evening, Pooh will be joined by HOJ teammate, Chaundon. The show starts at 10pm, sharp, and if you are under 21, you need to be there by then, to assure that you can get in. DJ Van Gundy is on the wheels, so you can expect a lot of wit on his end. Hahaha. But if you are in a 100 mile radius of the 540 tonight, you have no excuse as to where else you should be. Come rock with us, and have a great time, listening to great music…

Flyer design by me, ho…

Big ups to Roanoke, VA emcee, Poe Mack, on the release of his KevinNottingham.com sponsored mixtape, Move Mountains. Not only was I lucky enough to put together the artwork for this project, but I also have a verse on it, too. Other features come from Kaze, Sketch, Range Da Messenger, Jah I Witness, and K Beta. Poe produced most of the project himself, but got a couple beats from West Wonder & SKS. Shouts to DJ Van Gundy for mixing the joint together.

& don’t forget about the release party this Saturday night at Ruckus Pizza in Raleigh. It’s going to be bonkers. 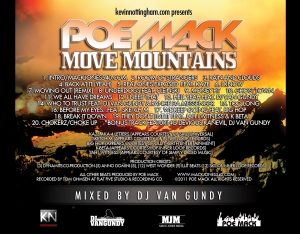 This project is a banger, so make sure you download it for FREE here…

Super shoutouts to Poe Mack for his upcoming release, Move Mountains, sponsored by KevinNottingham.com. This is the first leak off the mixtape, “Real Ones Exposed,” &  it features NC star, Kaze. The official release date is 1.18.2011, and the release party is on the 22nd in Raleigh. Make sure you check back for the release of the project & more info about the release party. Until then, make sure you download the his new joint for FREE here…

Shoutout to the Roanoke, VA homie, Poe Mack, on the upcoming release of Move Mountains, which will be presented by KevinNottingham.com. I got the privilege to do the Mixtape cover, which can be seen at the end of this video. I also got a 16 on this joint, so make sure you pick it up when it drops next month…