Shoutout to the homie Drique, and Risky Bizniz Clothing, on the release of his new mixtape, White + Blue. Drique has got a crazy buzz in NC, and this joint further solidifies his spot in the scene. Check out some more info here:

Raleigh, North Carolina native Drique London is back with his latest effort, White & Blue. The mixtape serves as a precursor to his upcoming album, ‘The Manual’, which is slated for a late spring/early summer release. White & Blue offers tracks produced by U’Nique Music, W2, Doc Verbs, and Brian Flores as well as features from Carrington, and SkyBlew.

Shouts to Drique London & Depth of Sound for collaborating on this hot new video. This is the first video from Drique’s upcoming project, The Manual, which is set to be released this Spring sometime. If you have been a fan of Drique’s laid back style in the past, then you will be equally as hyped about this one. Stay tuned to the site, cuz when The Manual drops, I will post links to it…

Big ups to the homie, Chedda Chapp, and his movement 24/7. Tonight they are throwing down in Raleigh at the Berkeley Cafe, and it’s sure to be a big night. Not only is the 24/7 cast performing, but also my good friends, MindsOne, Scottie Flippen & Kelsey Lu and more. It’s hosted by Lazurus & Drique London, and Nyce Danger is on the 1’s & 2’s. If you are in Raleigh & love hip hop, this is the spot to be at tonight… 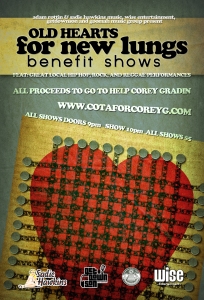 Tomorrow night marks the first show of 5 to help benefit Corey Gradin, a strong little girl who needs a double lung transplant and we are here to help. The collective acts of SADIE HAWKINS MUSIC, WISE ENTERTAINMENT, GOOMAH MUSIC, and GET DOWN SON have all come together to make this string of events a success.

Tomorrow night is the first event, and it’s at SIX FORKS PUB with CRUCIAL FIYA, DRIQUE LONDON, LAZURUS, S.GOLD, L1VE, J. CAPPS, & DJ NYCE DANGER. As all of these benefit events, this one is hosted by it’s creator, ADAM ROTTIN. Doors at 9pm show at 10pm & it’s only $5 to get in.

All proceeds go to Corey and her family….
www.cotaforcoreyg.com

flyer design by me.

Shoutouts to Drique London. 2011 is looking like it’s going to be a very special year for the up & coming emcee. With that being said, here is the first leak off his upcoming album, The Manual. Here is some info, straight from the man himself:

I got the song from a past relationship, i felt like she wasn’t in my best interest cant really recall the day that it was over, all i can remember is me wearing red chucks,… nothing else but red chucks funny huh… so i created this song talking strictly to the guys that is or was going through the same ordeal as me, keep it moving….

So here it is, “Red Chucks” produced by Majestic, off the album ‘The Manual” coming in the  spring. Download it for FREE here…

If you have been checking out my blog, then you definitely are familiar with Sucker Free Sundays at Shakedown Street in the heart of Raleigh. If not, it’s a dope weekly event that emcees from across the state come out to and showcase their talents. I went out there in November & it was bonkers. If you are an artist in the Cack, then you need to hit this event up.

With that being said, I was lucky enough to be hit up by A Robb from Eargasm Entertainment about designing some new promo material for them. So I came up with a couple different designs, and will be updating their info every week. So make sure you come back every week to find out which ones of your favorite emcees are performing every week. This week it’s Skip Luciano, Tuscon, Igwe Fogg, Phonetic, Loot Tenant, Rome Jeter, Drique London, Doc Verbz, Stranga the Great & Free Agent Jasun. & As always, the event will be deejayed by the legendary DJ Flash of the Justus League. Be there…

Hip Hop Events in the 919 Tonight…

If you are in the Raleigh-Durham area this evening, and you feel like you have nothing to do, well then you are utterly wrong. Not only is there one dope local event going on, but there is 2 dope hip hop events going on! Haha, here is the rundown…

First up is the Triangle’s bad guy, L.E.G.A.C.Y., performing alongside Sun Up, Son Down, Sleep Control, Garland Mason Band, and more. This show will actually be more of a mixed genre show with blends of hip hop and rock. Make sure you check out Sun Up, Son Down tho. It is the brainchild of former Plan B artist, Rivera with help from B-Wise formerly of Odd Numbers. They pack a lotta punch in their set.

If it’s not Raleigh tonight, then it’s gotta be Chapel Hill, as some of the hottest acts the Triangle have to offer square off in this hip hop extravanganza. See Tuscon, Lazurus, Drique London, Ease, SkyBlew, Azon Blaze and others tonight at the Library(in case, you couldn’t find it on the flyer/ahem cough cough, holla at me for your graphic design. haha).

Both shows are going to eb a great time with even better music, so make sure you hit one of them up tonight…

Shoutout to the homie Drique for banging out another dope joint in his weekly series. On this round, he and Pump It Up Media team up to promote hip-hop by remaking Tribe Called Quest “Award Tour”. Tributing real hip-hop.Take a listen, like it, love it and download the track for FREE here…. 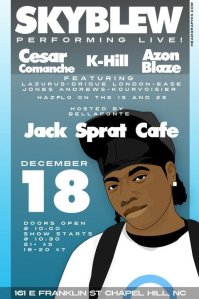 Chapel Hill is going to be bonkers this Saturday as SkyBlew, K. Hill, Cesar Comanche, Azon Blaze, Lazurus & more invade Jack Sprat’s on Franklin St. for this dope event. Make sure you make it out if you are in the 919 to see some of NC’s livest hip hop acts. Show starts at 10:30p, and it’s only $5 for 21 & up…

Make sure you check out K. Hill this Friday night in Raleigh as he performs at S. Gold‘s mixtape release party at the Southland Ballroom. Besides Hill, you can catch Lazrso superstars, S.Gold & Lazurus, Drique London, Yours Truly, and more. It’s gonna be a dope night, so if you like what you have seen & heard from K. Hill today, make sure you are there…

Shoutout to Drique London. I got to kick it with the homie for a few at the GetDownSon Release Party last weekend. Here goes a new video and download from him. He has a new one coming every week until January, so get ready. If you like the joint, you can download it here… 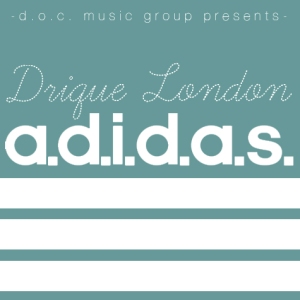 Shoutout to the homie Drique London. This is a New Freestyle From the Doc Music Goup Artist. It’s a remix of Killa Mike’s 2003 Classic A.d.i.d.a.s. Download it here. #NCHipHop is winning right now…