When Dho initially hit me up about doing the flyer, we talked about a couple different ideas. His suggestion, which ended up being used, was the idea to replicate a McDonald’s menu. At first, I wanted to make an old school-looking drive thru menu, but I nixed that idea after not finding the appropriate imagery. But after creating Dho’s idea, I put together the paper bag joints. These were supposed to look like the McDonald’s to-go bags like the ones below… 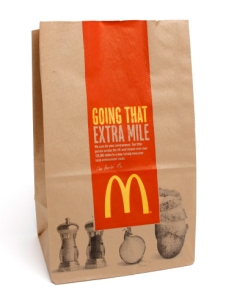 Even though they didn’t pick either one of these, I thought they turned out dope & I really wanted to share them with the world. Most of the time, I save designs that don’t get picked, because they can easily be used again by changing the text or picture, but for some reason, I don’t see myself doing a lot of McDonalds-inspired flyers in the future. & if I do, I guess it’s back to the drawing board… 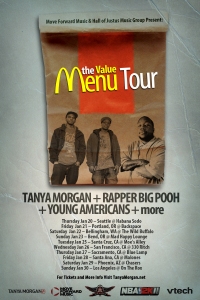 If you are on the west coast, make sure you check out one of these shows. They are guaranteed to be bonkers…

Check out some of the newest artwork I created. It’s the artwork for the Value Menu Tour featuring Tanya Morgan, Rapper Big Pooh, Young Americans(Pooh & Roc-C) & HOJ. It’s gonna be a crazy tour, so check the dates to see if they are headed your way. Here’s more info:

Vanguards of indie hip-hop, Tanya Morgan and Little Brother’s Rapper Big Pooh, are kicking off 2011 with The Value Menu Tour, serving up a 10-city run of concerts on the West Coast, starting in Seattle, WA at Habana Sodo on January 20th and ending in Los Angeles, CA at On the Rox on January 30th. The two artists have also recently been in the studio together and a collaboration is expected to leak soon. Check out all the tour dates below, more info available at TanyaMorgan.net.